Learn more about this exciting project below. 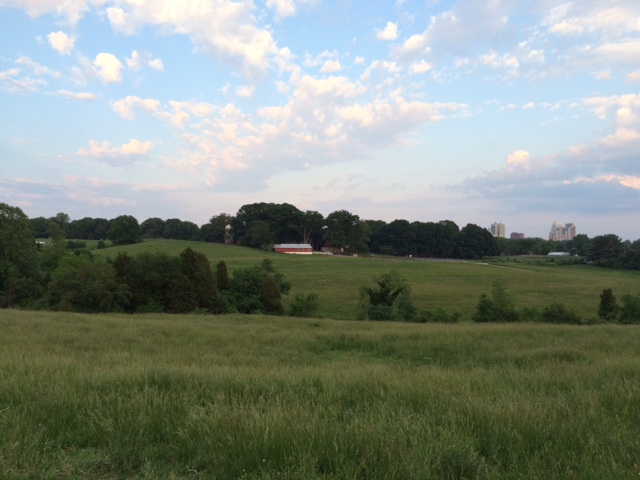 We are very pleased to share with you that on February 18th Piedmont Land Conservancy finalized and recorded a 92-acre conservation easement on the Crossnore School & Children’s Home farm.

PLC is very grateful for all the donors, the many volunteers and PLC’s Board of Directors who were willing to take on such a challenge. And, specifically, we’re all especially grateful for Micheal Hough’s dedicated leadership as chair of the Peace of Land campaign.
PLC received a critical bridge loan from the national environmental non-profit, The Conservation Fund, whose dual mission is to conserve land that is both environmentally and economically valuable to communities on a national and local scale.

“We are incredibly grateful for the way local residents, foundations, corporations and governments have responded to help make this project possible,” says Kevin Redding, PLC’s executive director. “This is a once-in-a-lifetime opportunity to conserve a property like no other city in North Carolina can claim.”

With this accomplishment, the Conservancy estimates it needs to raise just over $1 million more to fund the entire campaign and complete the remaining components of the project. The additional donations will fund the installation of a public walking trail with trailheads available from the Boston-Thurmond community and Reynolda Road farm entrance to the property. Redding says he hopes the trail construction will be completed in the next six to nine months with a public opening slated for later in 2020. In addition to the trail, the remaining $1 million will provide for maintenance and stewardship of the land in perpetuity.

PLC’s Peace of Land campaign commenced in early 2018 with a total goal of $7.9 million to complete the project. Local businessman Michael Hough has chaired the campaign and led the effort to conserve this treasured property. “We could not have made it to this point without Michael’s leadership and an incredible group of volunteers,” adds Redding.

Crossnore will continue to own the property and use it for therapeutic and educational purposes, much as it has been utilized over the past century.

More about the project:

One of Winston-Salem’s most beloved landscapes will remain pristine, thanks to an agreement reached between the board of directors of the Piedmont Land Conservancy and Crossnore School & Children’s Home.

Known as a Memorandum of Understanding, the agreement will allow PLC to buy the development rights of 92 of the 213 acres that make up what many know as “The Farm”– Crossnore School & Children’s Home along Reynolda Road.

The agreement will protect the land from development by what’s known as a conservation easement. Crossnore will still own the land, but the agreement will keep intact a tract of land that has generated memories for scores of children for more than a century.

“Many generations of Winston-Salem residents have treasured this property,” says PLC executive director Kevin Redding. “Thousands of children have grown up learning on this land while the surrounding communities have revered its serenity. With this project, PLC and Crossnore are ensuring that current and future generations will enjoy those same benefits.”

For years, Winston-Salem’s community leaders and PLC have looked for ways to protect this jewel of serenity and historic importance in the very heart of our growing city. That work is now underway.

Crossnore officials want the farmland off Reynolda Road to remain undeveloped so the land can become a pragmatic resource to help educate, heal and transform the lives of children who come to Crossnore to recover from crisis.

“This partnership is a win-win for PLC and Crossnore,” says Brett Loftis, CEO of Crossnore. “The land will permanently be protected from development, Crossnore will continue to own the land and have access to use it for programming for its children and the value of the land will be leveraged to financially support the programs of Crossnore.”

Michael Hough, a longtime Winston-Salem resident, will chair a capital campaign that will fund the conservation easement and the construction of a 1.5-mile walking trail and parking lot on the property’s perimeter. The trail will allow anyone to hike, picnic and enjoy a piece of property that offers a stunning view of Winston-Salem’s skyline.

Like Loftis, Alex Stacy sees the agreement as a win-win. “We’re excited to be able to keep our land as a sanctuary for children, as it was originally gifted, while offering local access to the community,” says Stacy, a member of Crossnore’s Board of Trustees and Chair of the Real Estate Committee. “Then, the healing power of that vast green space can be shared by all.”