News From The Field

Why I Love My Job

By Kalen Kingsbury – PLC’s Associate Director – After the dreary start to November, it’s nice to look back on these beautiful October days. The crisp fall weather with low humidity and temps in the low 70s made it an ideal time to be outside in Piedmont NC. I’m lucky to have a job that sometimes requires me to do just that.

Here are a few photos from my October “out of the office” but working time.

Though not technically required for work, I was on my way back to the office from a meeting and I passed a hiking area I’ve been wanting to see for over a year.  The Shallow Ford Natural Area on Gerringer Mill Road in Alamance County is owned and operated by the County Recreation and Parks Department. I spent about 45 minutes on the trail and came back with these pictures. I’d never seen an eastern cauliflower mushroom. When I spotted it just off the trail, it was as if the late afternoon sun was shining a spotlight on it. I read later that they are edible and quite tasty but very hard to clean.

Most of the trail was through woods but it was fun to take a short trek through these fields and watch the late season pollinators filling their stores for winter. There’s a nice platform with seats that offers a great place to view the meadow. Definitely worth stopping for a hike if you’re in the area.

For the past few years Piedmont Land Conservancy has offered a second Saturday outing each month aimed at connecting families to nature. The outing on October 10th was designed as a fun fall festival at Iseley Farms Alamance County. The land has been in the Iseley family since the late 1700s. The current owner, Jane Iseley, saw the need to diversify the tobacco crop. She now grows and sells strawberries in spring, tomatoes and other vegetables in summer and pumpkins and mums in fall. She also grows organic tobacco and believes strongly that as long as growing tobacco is legal, she’ll do it as a way to honor the heritage of the farm and this state. The “Vegetable Barn” is open from April to October to sell what is grown on Iseley Farm and other farms in the area.

Marie Poteat lives on the land she grew up on along the Deep River near Jamestown.  She donated a conservation easement on her family land to PLC in December 2014. On Sunday October 11th she hosted tours for the Second Sunday Nature Walk of the T. Gilbert Pearson Audubon Society and the North Carolina Native Plant society. 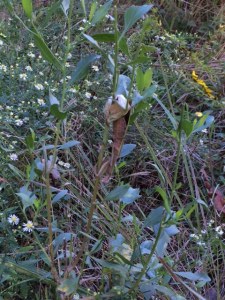 Marie has been working hard over the past several years to restore the native habitat of the land she grew up on. This means removing non native, invasive plants, converting fields of fescue to native warm season grasses and using management techniques such as prescribed burns to recreate the landscape that existed in some parts of the Piedmont before Europeans arrived. She is passionate about restoring habitat for a wide variety of species including insects, songbirds and small game.

I enjoy solitary time in nature but the benefit of a group hike with knowledgeable people is that I learn something new every time. If you look closely at this picture you’ll see a praying mantis laying her egg sac on the stem of this grass. She’s well-camouflaged but the puffy white egg sac is at the top center of the picture and she is brown and upside down.

Morning Briefing for Staff and Volunteers

On Monday and Tuesday, October 12th and 13th, PLC hosted a field trip for 260 eighth grade students from Western Rockingham County middle school. The event took an incredible amount of logistical planning and recruiting volunteers to run three different stations – hiking and plant identification; water quality and macroinvertebrate identification; and ecosystems and nature reflection and writing. The students rotated through each station in groups of 10 – 15 for one hour sessions each. Palmer McIntyre is the logistical genius on our staff and she did an amazing job of coordinating all aspects of the event but we couldn’t have done it without a crew of talented volunteers and staff.

I will admit that 260 – 13 and 14 year olds was not my first choice for our inaugural school field trip at the Knight Brown Nature Preserve. The prospect seemed daunting but it couldn’t have gone any better. The weather was perfect – no rain – low humidity – temps in the 60s in the morning warming to the low-70s by noon when the sessions ended.

It was fascinating to see the different dynamics and levels of interest within each group of students. One girl had never been in the woods before in her life! She worried about what might “get her” but by the end of the hike she began commenting on the peaceful it was in the woods and on the beauty of the trees. Others were experienced deer hunters and were excited to show me deer rubs and scrapes. The kids had different levels of energy and interest (by the third group both days, they were getting hungry and perhaps tired) but they were smart, engaged, polite and eager to share their discoveries. Here are a few pictures from the field trip. The early November rains forced us to cancel the family fun day that was scheduled for November 1st but look for information about spring outings to Knight Brown Nature Preserve.

Our efforts to save the planet and protect a few treasured natural places in the areas we live, will depend on raising new generations who have a conservation ethic. With so many children cut off from opportunities to experience nature there’s a risk that we’ll have fewer and fewer people willing to do that, which is very sad. Part of PLC’s mission is “connecting people with nature.”  These two days were a huge step in that direction.

I’m paraphrasing something originally stated more eloquently by someone else but you only save what you love and you only love what you know. If there’s any hope of saving this planet, it is imperative that people of my generation who value and love nature help bridge the gap for children of this generation who are growing up without nature as part of their daily lives. The opportunity to do that is one of the many reasons I love my job.

“Passion is lifted from the earth itself by the muddy hands of the young; it travels along grass-stained sleeves to the heart. If we are going to save environmentalism and the environment, we must also save an endangered indicator species: the child in nature.”
― Richard Louv, Last Child in the Woods: Saving Our Children from Nature-Deficit Disorder

No Replies to "Why I Love My Job"

Got something to say? Cancel reply