As a child, I was more impressed by feats of human ingenuity than by the wonders of nature. I grew up on a 12 acre historic farm property located in the former margin between the suburbia of Philadelphia and the open fields of Amish country. The property was bordered on one side by the lovely and strong-flowing Shamona Creek, which, at the corner of our land, ran under an ancient stone bridge into a deep pool and then a wetland.
However, I was a bookworm, a tinkerer, and a bit of a homebody given my strong reactions to insect bites and stings. Thus, it was not the life of the stream that captured my imagination as a child, but rather, it was the home I grew up in. This notable stone structure was built in the colonial style in 1785 and expanded in the Georgian style in 1829, and had two front doors, one from each period. There was a spring running through the basement, a “feature” that was apparently a surprise to the original builder and was a source of consternation to grown-ups since time immemorial, but was amazing to my child-self. If I forgot to turn off the basement light, its light would greet me in my garret bedroom at night, shining through the cracks in the plank-and-beam floors. I spent countless hours playing in an old loft that was accessible only by ladder, located above our once-detached summer kitchen with its huge cooking fireplace and beehive bread oven. I tried not to get caught poking around in the attached smokehouse-turned-storage closet, where my step-mother hid Christmas presents and stored an amazing array of antique gadgets, knick-knacks and yellowed documents amongst the wrought-iron meat hooks driving into the rafters. I would frequently daydream about the people who had been born, lived, and died in the home over its two centuries. When my parents would go out for an evening, it was easy to conjure up ghosts from the ever present draughts and noises. I’d turn on all of the lights and build a roaring fire to assuage my nerves.
Despite my love of poking around that old house, I did manage to brave the bugs and develop a deep appreciation for Shamona Creek. I’d hike along its edge, and stand on the ancient stone bridge, watching the fish dance, feed, and dart away from pebbles that I’d throw into the pool. Little did I know that my memories of Shamona Creek would become relevant to my new career at Piedmont Land Conservancy.
My step-mother ran a landscape and garden center, and our farm was the nursery for her business’s ornamental trees as well as a staging and growing area for our perennial plants. One year, we needed more space for the potted perennials, and laid down a few thousand square feet of weed mat on a grassy area a handful of yards from the stream. While the ground was soft, this space met our needs. That is, however, until our uphill neighbor’s farm was turned into a large subdivision. When the heavy summer rains came, we quickly discovered (much to my parent’s chagrin) that the earthwork of the subdivision unintentionally altered the flow of stormwater, creating a new ephemeral stream that channeled rain water across our field down to the weedmat area and into Shamona Creek. 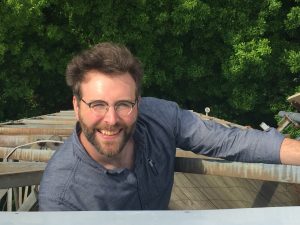 The products of human ingenuity—the subdivision’s alteration of stormwater flow and our installation of the weedmat area—overwhelmed the water carrying capacity of the land. When the heavy summer rains came, we discovered that our weed mat and potted plants were completely under water, in an area that had not been prone to flooding. After several more flooding incidents, we had to abandon the area.
In the hindsight of adulthood, I now realize that our riparian buffer was far too small. While the subdivision’s bad stormwater handling did dump a large amount of water onto our property, our lack of a robust natural riparian buffer caused our flood line to be much higher than it would otherwise have been in its undisturbed state.
Modern riparian buffers are typically a minimum of 50’ on each side of a stream. A great deal of research and experimentation has gone into determining the composition of such buffers and their beneficial impacts on a wide array of matters, including water quality, stormwater management, and on adjacent property. Intact and healthy riparian buffers not only protect against erosion and improve drainage and downstream water quality, they also provide shade and cover, which lowers stream temperatures for aquatic life and provides living space for wildlife.
Now, as Piedmont Land Conservancy’s newest staff member, I’m learning all about the vital ways that PLC protects land, farms, and watersheds. Stewardship of protected properties is a key function of PLC, and part of stewardship can include monitoring legally protected riparian buffers. After only a few short weeks at PLC, I have had the privilege to hear from several farmers with healthy and legally protected riparian buffers praise the improvements that their buffers have brought to their entire properties. Working for PLC is a realization of a goal that was nearly ten years in the making. I look forward to getting to know the land and people of our nine county service area.