The Gypsy Moth is Here 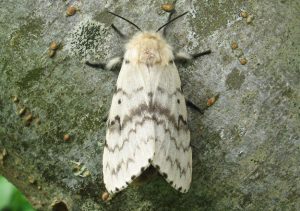 Native to North Africa, Europe and Asia, but invasive here, the gypsy moth, Lymantria dispar, is one of the most destructive pests of hardwood forests in the eastern US. The gypsy moth originally escaped from a silkworm breeding operation in Medford, Massachusetts in 1869, and has since been spreading and causing infestations throughout the northeastern US, adjacent Canada and more recently the Midwest. That spreading invasion is now on our doorstep.

Humans inadvertently aid in the spread of gypsy moths because female moths like to lay their eggs in sheltered places, not only the bottom of tree branches, but also underneath or inside things that move, like recreation vehicle trailers, lawn furniture, camping gear, fire woodpiles, utility sheds, and underneath cars and trucks. Eggs lie dormant for about 9 months, hatching the next spring when the new leaves emerge on hardwood trees. Caterpillars naturally disperse relying on the wind to carry them.

Small infestations can build up dramatically, causing significant ecological, economic and social impacts. If unchecked, gypsy moths can kill hardwood trees after two or three successive seasons of defoliation. There are few natural predators for gypsy moths and none that keep a population in check. Wildlife and domestic animals like chickens do not eat the caterpillars because of their dense covering of mildly stinging hairs. People also can have allergic reactions to inhaled caterpillar hairs. The caterpillars are also a nuisance around homes as large numbers become squished and caterpillars feeding in trees produce significant amounts of droppings. 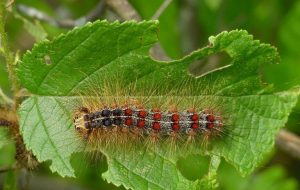 We hope not see gypsy moths get established in the area served by PLC. Many counties just to our north are infested, resulting in small colonies in our area. This year the NC Department of Agriculture has targeted treatments to eliminate gypsy moth in Surry, Stokes, Rockingham, Caswell Counties along the NC/VA line. This is now the front line in the war on this invasive pest.
Our best defense to control this pest is an informed and alert public. A public that watches for signs of new infestation and is aware of how egg masses might be spread. Helping the NC Department of Agriculture identify problem spots early means they can use the most environmentally safe, effective and reasonably cost control measures. If you see some unusual caterpillar defoliation in your travels around the piedmont, let someone know so they can check it out. Our forests will thank you!