At the back of my mind, a little voice whispered an old Chinese saying that we should be careful what we ask of the gods.
It’s January 2016, and I’m talking to Brandon Price, whom I’ve contracted to carry out a prescribed burn on 20 acres of our land near Reidsville, NC. Aided by my wife and Collie dogs, I’ve worked since 2011 to turn those acres into a re-creation of a grassland/prairie such as we believe was common in the piedmont of the Carolinas when the European explorers arrived here in the 16th century.
The warm season grasses we’d planted reached their full size and thickness for the first time in September 2014. The prairie was now alive, and from this point forward, controlled burns will be necessary at least every three to five years, to keep the build-up of dried grass fuel from becoming excessive and to continue selection for the fire-resistant grasses and other plants typical of prairies.

By 2016 a lot of dead grass had accumulated, and undesired tree saplings had appeared, so what I was asking Brandon for was a controlled burn so hot that it would remove all the grass fuel and kill all the saplings. What came through this fire would be legitimate prairie vegetation.
But it’s not as simple as desiring a prescribed burn.
Weather conditions must be within certain limits for the NC Forestry Service to give a permit for a prescribed burn as large as our project, for safety reasons and to prevent smoke from inconveniencing neighbors. For example, there must be enough wind to give the fire front a direction but not enough to create an un-controllable inferno. And after March, when the wildfire season starts, the Service is reluctant to give permits for prescribed burns, since, if one gets out of control, fighting it might require resources of fire fighting personnel and equipment the Service needs in putting out wildfires.
Finally, I heard from Brandon on March 7th that the prediction for the most important weather parameters for the next day looked suitable for our fire, so I requested a burn permit from the Forest Service and notified our county Forest Ranger and our county fire emergency office that we planned to burn on the 8th. The wind was to be from the southwest, which was our preference.
Brandon was the burn boss and had a trained assistant with him. I’d asked two of my friends, Keith Davis and Milton Hundley, to work with us, and my nephew, Wyatt Latimer, who lives near Washington, DC, decided to drive down early Tuesday morning with his two sons so they could share the experience. Altogether we had six adults working, all of whom had previous experience with prescribed burns. Two-way radios kept us all in touch, very important in such work.
The prairie project is in two equal tracts, and we burned the eastern one in the morning with no significant incidents. As I’d expected and wanted, the fire was strong from its inception, with flames at times scorching the tops of loblolly pines as high as 50 feet tall. It moved quickly, and in a few hours that part of the burn was over, and we broke for lunch. The only thing unexpected was a visit from the local volunteer fire department, who wanted assurance things were under control. I’d notified all the neighbors within about a half mile several weeks earlier of a coming prescribed fire, but some were concerned by the tall column of smoke over our property. 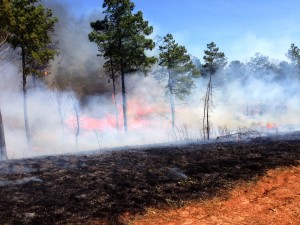 The afternoon fire, in our western prairie area, was quite different. As usually happens, the increase in air temperature during the morning caused some increase in wind speed and increased the burn speed, but the surprise – and it was a big one – came when we were about three quarters through the afternoon burn, when the wind direction quickly, un-expectedly switched 90 degrees, from southwest to southeast.
Throughout the day we’d been “steering” and managing the burn as a “backing fire”, moving into the wind. Now, with a significant section still to burn, the wind at one corner of the fire was pushing the fire front from the side, greatly accelerating the burning rate. Brandon quickly directed that a diversionary fire be started to turn the direction of the main burn, and eventually this did the job, but in the meantime there were quite a few of us watching as flames briefly reached above the highest pines. Some thought this lasted only a few seconds, and others thought it was a few minutes, but no one is likely to forget it.
After that incident the fire burned up to the final fire lane and went out. I had gotten my wish; the landscape was totally different. Except for the large pines, almost nothing was still standing above the ground, which was now smoothly covered with a layer of ash everywhere – for acres. I was happy and at the same time sobered. Things can happen despite the best planning. 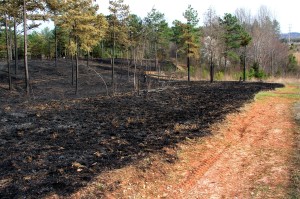 My expectation was that the nutrients in the ash would fertilize the roots of the prairie plants in the coming spring rains, and we would see a beautiful re-birth of the prairie in the next months. It has happened; come see it on August 13th for Piedmont Land Conservancy’s 2nd Saturday outing. All are welcome!